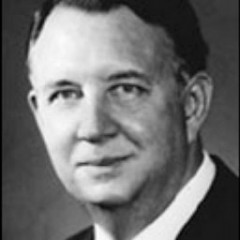 Paris Reidhead devoted his life to communicating the message of the Gospel in America and throughout the world. His sermon “Ten Shekels and a Shirt” has been called one of the most influential sermons of the 20th century and is a must-listen for all serious minded followers of Christ.

This message has been called one of the most influential sermons of the 20th century and it is certainly one of the most powerful sermons that I have ever heard! I frequently listen to this sermon and I heard it now probably at least a dozen times. In Judges 17, the prophet, Micah hires a Levite as his personal priest. The price for the Levite’s services was ten shekels (of silver) and a shirt. The real point of this sermon is...

The Right Use of the Law – Paris Reidhead

This is another tremendous message by Paris Reidhead. Starting in Romans 3:19-31, this sermon shows the purpose and necessity of the Law in producing genuine conversion. Although all can recall wrongdoing, the Law has been given to convict us of sin – to show the enormity of our crime against a holy, just, and righteous God. Until we are convicted of our crime and cry out to be free, the Gospel of salvation holds no real...